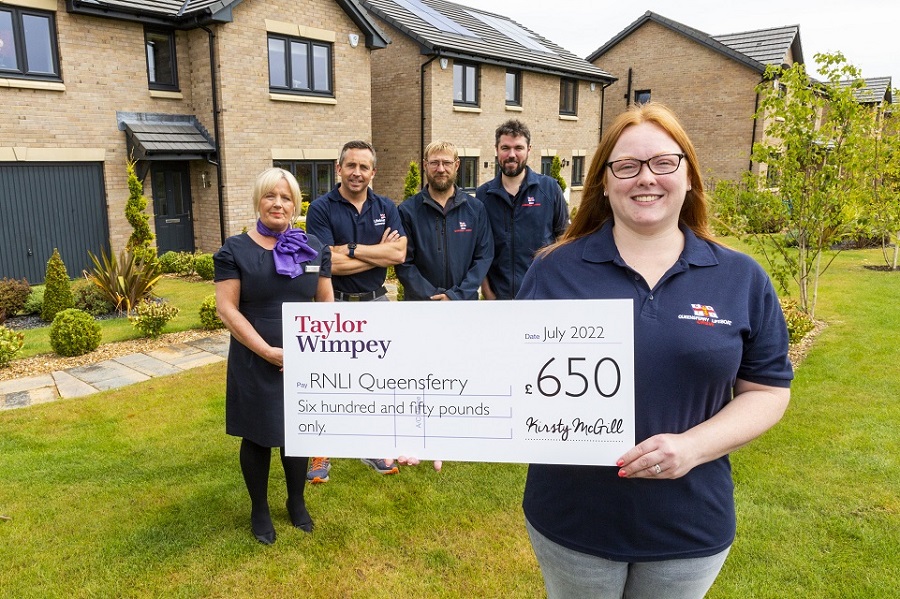 A second tranche of £650 has been donated to the Royal National Lifeboat Institution at the launch of Taylor Wimpey East Scotland’s Hawthorn Gardens development in South Queensferry.

The housebuilder has teamed up with the charity to donate £25 for each new home sold and legally completed at the development.

The new donation brings the overall total to £1,725 paid so far towards the grand sum of £9,500 that has been pledged to the RNLI, with all money going directly to the local Queensferry RNLI Lifeboat Station.

The donation recognises the long-term relationship that has been established between Taylor Wimpey East Scotland and the RNLI with the money contributing towards the amazing life-saving services the Queensferry RNLI Lifeboat Station provides. The charity aims to use volunteers wherever possible and with voluntary donations, this donation contributes to funds which are necessary to make this achievable and will help with the RNLI’s overall aim of saving lives at sea.

The RNLI has a vital role within the community of Queensferry, and the local lifeboat station covers the Firth of Forth with its B class Atlantic lifeboat – one of the fastest in the RNLI fleet. The crew members are dedicated to keeping the local community safe and they have received three RNLI medals for gallantry.

Commenting on the support that they have received, Adele Allan from Queensferry RNLI said: “We are extremely grateful for the ongoing support that we receive from Taylor Wimpey East Scotland, and we cannot thank them enough for their second generous donation. The money they have donated and continue to donate will be used locally here at Queensferry Lifeboat Station, allowing us to continue providing our 24/7 lifesaving service and achieve our overall goal of saving lives at sea. On behalf of everyone at the RNLI, I would like to say a huge thank you.”

Kirsty McGill, sales and marketing director at Taylor Wimpey East Scotland, said: “We are delighted to be able to support our local RNLI Lifeboat Station at Queensferry. Our donation of £1,725 to date reflects the continuation of our long-term commitment to this very worthy cause that provides a link between the new community that is emerging at Hawthorn Gardens, and the existing community of South Queensferry. Working with the RNLI is a real honour and we are extremely proud to be able to show our support in this way.

“Being able to work with local charities and organisations that surround our developments means a great deal to us, and it’s always lovely to know that we are helping to make a difference to the lives of people in our local communities.”

Taylor Wimpey East Scotland’s donation to RNLI is one of the many contributions being made by the housebuilder towards community facilities and infrastructure in the wider area.